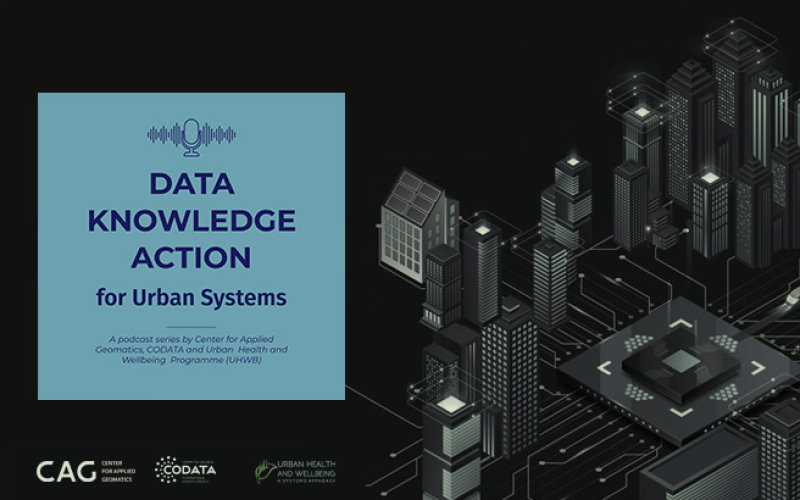 In the introduction episode of the podcast series, Dr. Shaily Gandhi speaks with Dr. Simon Hodson and Dr. Franz Gatzweiler. Together, they discuss Data-Knowledge-Action systems and take a deep dive into the need for such systems for urban sectors.

Dr. Shaily Gandhi is Manager Informatics at CRDF. She is an alumnus of CODATA/RDA Summer school and one of the initiated Leads for the CODATA Connect Working group and a co-opted member of the CODATA Executive Committee. Dr. Gandhi has completed her PhD degree from CEPT University in 2018. She is also a faculty at CEPT University. Dr. Gandhi has been working on the implementation of GIS and data science in the domain of Urban Analytics.

Dr. Simon Hodson is the Executive Director of CODATA.  Dr. Hodson is an expert on data policy issues and research data management. He has contributed to influential reports on Current Best Practice for Research Data Management Policies and the Science International Accord on Open Data in a Big Data World.  Most recently he chaired the European Commission’s Expert Group on FAIR Data which produced the report Turning FAIR into Reality. As part of his CODATA role, Dr. Hodson is closely involved in an ISC and CODATA initiative to improve the coordination of standards for data integration and interoperability for interdisciplinary research and in the coordination of the CODATA Data Policy Committee.

Impact of Environment on Human Health

Learn about the quality of life, data for building healthy cities, green spaces, and the impact of climate change on cities' health.

Suraj Bhattarai is a public health physician and urban health researcher and a research fellow at the Global Institute for Interdisciplinary Studies, a scientific committee member of the International Science Council’s Urban Health and Wellbeing Programme, and a regional coordinator of the ISUH’s ‘Urban health mapping and analysis project’.

Keiko Nakamura, MD PhD, is the Director of WHO Collaborating Centre for Healthy Cities and Urban Policy Research and Professor of the Department of Global Health Entrepreneurship, Tokyo Medical and Dental University. She is a public health scholar with over 25 years of experience in research in health and environment in urban areas, with a particular focus on healthy cities and urban policy; determinants of health; population ageing; use of information technology in health services; public health emergencies; planetary health; and implementation science. She has worked with the global Healthy Cities movement since the 1990s.

Insights into the kind of data we use and its value, the role of data in planning cities, and how to mitigate the risk of misuse of data.

Andrew Young is the Knowledge Director at The GovLab, where he leads research efforts focusing on the impact of technology on public institutions. Among the grant-funded projects he has directed are global assessment of the impact of open government data; establishing principles and practices to inform responsible handling of children’s data in humanitarian and development contexts; a methodology for leveraging corporate data to benefit the public good; and crafting the experimental design for testing the adoption of technology innovations in federal agencies.

Join the conversation on mobility data, pollution, personal data privacy, cost of traffic on health, data ownership, and the cost of changes in traffic conditions.
Ruth is currently a Director at Hocone limited where she collaborates with Australian researchers on the application of ethical and privacy-preserving frameworks in data analytics and AI. She was previously Director of R&D and Data Integrity at Australian Education Technology company Practera where she worked with universities and research organisations to innovate new ways of delivering high-quality work-integrated learning and lifelong learning skills development at scale. At Practera, she established a three-year government-funded multi-disciplinary cooperative research project to develop a privacy-preserving framework for AI and data analytics in the education sector.

Paulo Saldiva is a Pulmonary Pathologist and Professor at the Faculty of Medicine of the University of São Paulo. His research is mainly focused on Urban Health, with a special interest in air pollution, climate and health vulnerability.

Data for Policy-makers to Improve Decision Making in Cities Wellbeing

In the fourth episode, Dr. Abdalhadi Alijla, social and political science advocate speaks with Rachel Cooper OBE, Distinguished Professor of Design Management and Policy, Lancaster University about important factors for the wellbeing of cities. They also discuss the quality of data, GIS data, and the role of data-knowledge-action for urban systems in policy-making.

Abdalhadi Alijla is a social and political scientist and science advocate. He is the recipient of the 2021 International Political Science Association Global South Award. Alijla is the Co-Leader of Global Migration and Human Rights at Global Young Academy. He is a co-founder of Palestine Young Academy in 2020. He is an Associate Researcher and the Regional Manager of Varieties of Democracy Institute (Gothenburg University) for Gulf countries. He is a Post-doctoral fellow at the Orient Institute in Beirut (OIB). Since 2021, he is an associate fellow within SEPAD, sectarianism, proxies and de-sectorisation at Lancaster University. Since April 2018, He also serves as an Associate Research Fellow at the Post-Conflict Research Center in Sarajevo, Bosnia and Herzegovina. Abdalhadi has a PhD in political studies from the State University of Milan and an M.A. degree in Public Policy and Governance from Zeppelin University- Friedrichshafen, Germany.  He has been granted several awards and scholarships, including DAAD (2009), RLC Junior Scientist (2010), UNIMI (2012), ICCROM (2010), Saud AL-Babtin(2002) among others.

Rachel Cooper OBE is a Distinguished Professor of Design Management and Policy at Lancaster University. She is founding Director of ImaginationLancaster, http://imagination.lancaster.ac.uk, an open and exploratory design-led research centre conducting applied and theoretical research into people, products, places and their interactions. Her research interests cover design thinking; design management; design policy; and across all sectors of industry, a specific interest in design for wellbeing and socially responsible design. She has published extensively on these topics, including books, 'Designing Sustainable Cities', 'The Handbook of Wellbeing and the Environment and ‘Living in Digital Worlds; designing the digital public space’. She has attracted over £25m in research funding in the past 10 years, much of which has focused on the future of cities and human and planetary wellbeing. Professor Cooper has undertaken several advisory roles to national and international universities, government and non-governmental organisations. She was a Lead Expert for the UK Government Foresight Programme on the Future of Cities (2013-2016), was on the UK  Academy of Medical Sciences Working group addressing ‘The Health of the Public 2040’ (2015-16) and is a  currently a Chair of the UK Prevention Research Partnership, Scientific  Advisory Board.

How are DAKAS used in cities

Dr. Simon Hodson is the Executive Director of CODATA. Dr. Hodson is an expert on data policy issues and research data management. He has contributed to influential reports on Current Best Practice for Research Data Management Policies and the Science International Accord on Open Data in a Big Data World. Most recently he chaired the European Commission’s Expert Group on FAIR Data which produced the report Turning FAIR into Reality. As part of his CODATA role, Dr. Hodson is closely involved in an ISC and CODATA initiative to improve the coordination of standards for data integration and interoperability for interdisciplinary research and in the coordination of the CODATA Data Policy Committee.

Trust is the Heart for Urban Wellbeing

In Episode 3 of the podcast series, Dr. Theresa Dirndorfer Anderson speaks with Ana Ortigoza about data life cycle, complex interconnections in health, and methods to be adopted to build trust.

Dr. Theresa Dirndorfer Anderson is a data and information ethicist passionate about future digital and data infrastructure. She is Principal/Founder of Connecting Stones Consulting, Sydney Australia.

Her award-winning work as an educator and a researcher engages with the ever-evolving relationship between people and emerging technologies. As inaugural director of the Master of Data Science & Innovation program at the University of Technology, Sydney, Dr. Anderson’s research guided the development of a uniquely transdisciplinary and human-centred curriculum.

Ana Ortigoza is a Research Fellow at the SALURBAL project – Drexel University, Philadelphia, United States. Ana’s research focuses on linking different aspects of the urban environments and maternal and child population health. She has been a paediatrician for almost 10 years.  She is interested in how health inequalities among women and children/youth are lnked to social and built environment in cities.

In the second episode of the series Pamela Carbajal, Urban health and regional planner (Planning, Finance and Economy Section). Global Solutions division talks about integrating health in urban planning. The episode also introduces a Sourcebook that has elaborated the concept of integrating health in urban and territorial planning. Pamela talks about the learnings while developing the sourcebook and the impact of Data-Knowledge-Action for Urban Systems with respect to health and urban planners.

Pamela is an Architect from the University of Technology of Monterrey, Mexico. Since January 2018, she works at UN-Habitat, particularly on Integrating health in Urban and Territorial Planning (UTP). She coordinates the program planning for healthy cities and has delivered capacity building activates and gives technical advisory to local and national governments.

Moreover, Pamela has a particular focus on building healthy environments and social inclusion. she had collaborated with WHO on developing the Sourcebook on Integrating health in UTP and a Compendium of Inspiring Practices.

Moreover, she has also supported Bolivia, Argentina, and Mexico on their National and Subnational Urban Policies development. And work with the Global Public Space Programme at UN-Habitat on citywide public spaces strategies for different cities in Latin America.

Previously, she worked at the Public Space Authority of Mexico City as part of the design team, assessing and designing public spaces. And at the Municipal Institute of Planning in Chihuahua, Mexico where she worked on a neighbourhood master plan.